It's all about the STORY!

“i own me” Local Caregivers Empower Teens To Stay Safe

The Spring of Tampa Bay has partnered with Ad2 Tampa Bay to develop a statewide social marketing campaign, “i own me,” empowering youths to set boundaries and prevent violence.

Abuse Can Seem Subtle but Lead to Danger

I  recently interviewed Brenda Rouse, director of communications of The  Spring of Tampa Bay, who described how abuse begins in a relationship.  According to Rouse, abuse begins as a situation in which one person in a  relationship does not honor and respect the personal boundaries of the  other person. Boundaries are critical; these are the rules a person  establishes for him or herself and how he or she wants and expects to be  treated.

Rouse gives an example: “If I were a teenage girl, my  boundaries could include how late at night you can call me on the phone,  the words I allow you to use when you speak to me, the pet names you  give me, and even whether or not you display affection to me in the  halls at school. Violate these boundaries, and it’s abusive. These  personal boundaries are often violated before physical violence and  sexual abuse begins.”

Rouse explains that teaching young women how  to recognize, establish and enforce their personal boundaries is  becoming much more difficult in this age of cellphones, Skype and  Facebook and Internet communications. Rouse said that many girls who  have been abused will tell you that the problem often begins when young  men expect girls to answer calls and respond to text messages on a  24-hour cycle. There is no allowable downtime for communication.

Teens can take the pledge “to  demand respect from my boyfriend or girlfriend. I expect to be treated  properly by establishing personal boundaries and to be honored in my  decisions concerning privacy, sex, and affection. I will not tolerate  being physically, verbally, or emotionally hurt” by visiting www.iown.me. They also can like the “i own me” Facebook page and follow “i own me” on Twitter.

Why Preventing Teen Violence Is Important

This is an accident and only because we are a rebellious lot. If we did as we were taught, however, we would be merely mindless drones spitting out disconnected facts, laced with convenient inaccuracies and fearful of developing anything that could be categorized as innovative or cutting-edge. Schools would have deemed this all dangerous anarchy. Well, if progress and questioning the validity and effectiveness of all that’s preached to us is anarchy, all hail anarchists!

Does school kill creativity and therefore progress, innovation and forward-thinking? Yep. It does.

Look, it’s true. But it’s not the whole story. I grew up in the folds of the fine and performing arts, and I was exposed to powerful fine and performing arts education. However, I know that my story is unfortunately unusual, and even with this environment, it was still difficult placing a high value on the arts while surrounded by traditional school values–I didn’t fit in there. I was still a bit of an outcast and fantastically misunderstood.

Radical change is needed if we have enough insight to recognize the critical need to nurture and effectively educate the creative class and creative capital in our culture. It is the creative mind that will solve problems, believe that change is possible and throw convention and barriers away to make the impossible reality.

Watch this from Ken Robinson who says that schools kill creativity. He’s right! What do you think? 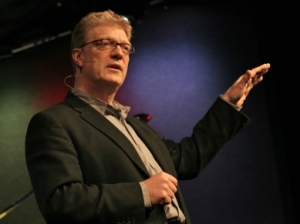